Willow never ceases to amaze us. She makes a hobby out of smashing stereotypes… conquering obstacles… and defying expectations. I guess you could say she likes to keep the world guessing. Just ask her doctor.

Two weeks ago… I blogged about Willow’s blood count. Her neutrophil level was low and her doctor was fairly certain she had cyclical neutropenia. We were told that her next blood count… a week later… “should” show an increase of neutrophils… signifying the start of a new cycle (this is why they call it “cyclical” neutropenia :)). Two weeks and two more blood draws later… and her neutrophil level is still not up. In fact… it’s NON EXISTENT! According to Monday’s blood draw… Willow has ZERO neutrophils in her blood. For those just joining us… neutrophils are a type of white blood cell… and are your body’s primary line of defense against infection. On paper… Willow appears to have a big sign on her back saying “Hey germs!! Come on in!! I’m open and ready for business!” But anybody who has been around Willow lately will tell ya… she’s healthy… happy… and thriving! I should add that my son… oldest daughter and husband have all had colds this past week… and Willow has also made multiple trips to the grocery store… church… and doctor’s office (aka: party central for germs). None of it makes sense! Even her doctor… arguably THE best oncologist/hematologist in the area… agrees. I’m gonna give all the glory to God. I’m also gonna give a big shout out to all of you who have been praying to Him. I’ll also throw in some cred for Willow… as she’s the ultimate overcomer. Now that I’ve got all that out… I’ll attempt to explain where we go from here…

Rather than treat the unknown… Willow’s doctor wants to wait and treat the known. What that means is… if Willow ever gets sick… develops a fever… or just doesn’t seem herself… she’ll get a shot of Neupogen. That’s the stuff that she got when she was in the hospital last month. It’s also the stuff they give cancer patients who usually have low white blood cell counts due to chemo. Willow will also get Neupogen whenever surgery or medical procedures are performed. So… when she gets tubes put into her ears next month… she’ll get a shot the day before the procedure… the day of the procedure… and the day after the procedure. This will hopefully give her body the boost it needs to fight off any possible infection. Throw in a little more prayer… and I’m convinced she’ll be covered.

Now… I should note that while I’m fully convinced God has Willow blanketed in protection… I’m not about to throw her into the germy fire. I still pack germ-fighting heat (in other words.. I carry hand wash). I also will not hesitate to steer clear of you if you are sneezing… sniffling… or scratching your behind. Willow is truly a magnet for infection… but we also have to live our lives. We still take her grocery shopping… we still attend church… we still love on her as much as possible. It’s been challenging these past few weeks… knowing what we know… and taking her places. Willow’s cheeks beg for pinching. And I am a people-pleasing coward. I am painfully ashamed to admit that I have not spoken up when I probably should have these past few weeks. It’s hard being the meany pants… shooing people away… when all they want to do is love on your baby. I’d like to say I’ll be more vocal from here on out… but man… it’s stinkin’ hard.

So… to summarize… “so far… so good”… but I have no clue what’s going on… and what the future holds. I guess that’s what it means to trust. My husband thanked Willow this morning “for the ride.” I second that. It’s been scary as all heck… but completely worth it. I mean… come on! Look at this girl…. 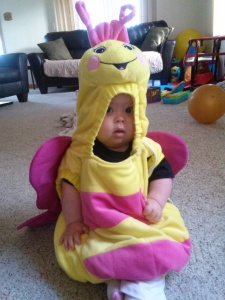 One thought on “Huh?”