It’s the clearest word in Willow’s vocabulary. It’s also the word she says most frequently. I’m talking at least 50 to 60 times a day. I kid you not. Just ask the “kid” she’s calling for, Bella, aka, “Sissy.”

To say these two are best friends is an understatement. Bella and Willow are soul sisters, BFF’s, joined at the hip, unless they’re dancing, of course. 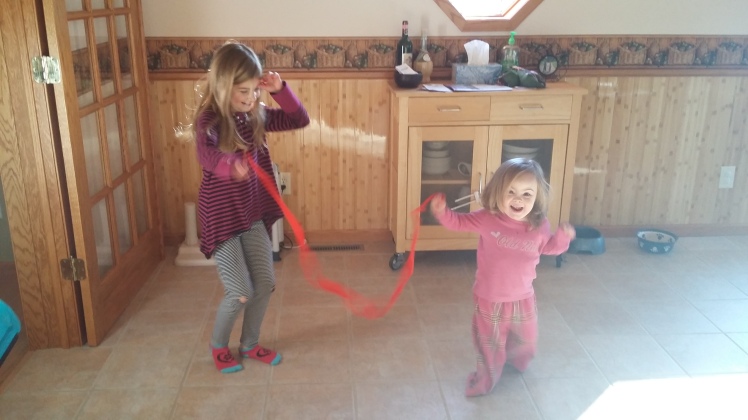 Sometimes, I just don’t believe it. I never thought it could be this way. Because, while they have so many similarities, in the beginning, I spent too much time focusing on all their differences.

When I found out I was pregnant with Willow it was a shock. We thought we were done having kids. Our oldest, Laken, was about to turn 6. Bella had just turned 4 and my biggest concern at that time was the age gap that I thought would divide our children. Would our youngest ever bond with our oldest? Would our middle child have anything in common with the new baby?

I learned the answer to that question pretty quickly. Our 20 week ultrasound revealed that our new little bundle was a girl, just like Bella. Needless to say, the soon-to-be big sister was excited. In fact, she spent the rest of my pregnancy planning and preparing for the arrival of her new playmate. While the age difference still worried me, I started thinking things would be ok. That is, until delivery day.

“We think you’re baby has a heart defect.”

Those were the first words out of the mouth of the doctor.

“And, we think the heart defect is due to your baby’s Down syndrome.”

Those were the last words out of his mouth. Well, the last words I heard, at least. I think he may have said more, but I really didn’t process much after that point. I was in shock. I was scared. I was confused.

To be honest, the heart defect was the scariest part for me. I thought my new baby, the little girl I had just birthed, the precious child we had just named Willow, was going to die before she even had a chance to live. The Down syndrome diagnosis didn’t really phase me.

As the days passed and the cardiologist filled our hearts with hope, I caught myself thinking about what Willow’s future might actually look like. I felt a lot of happiness. That is, until I thought about Willow’s big brother and sister. Would they ever bond with Willow? I mean, it’s one thing to have an age gap between them, but, now they had an extra chromosome in there, too.

I wasn’t afraid of Down syndrome but I was afraid of what it might mean for my older kids. I couldn’t help but feel sorry for them, especially Bella. She was so looking forward to being a “Big Sissy,” to having a little playmate, a built-in best friend. What would this diagnosis mean to her?

Fast forward 3 years. I have my answer. 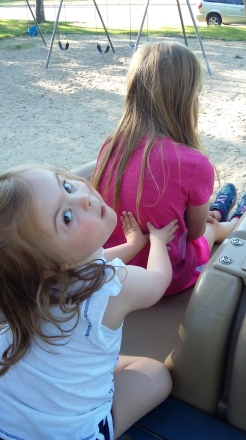 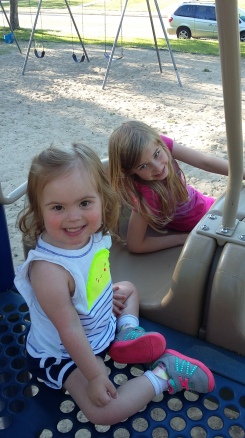 Down syndrome… that extra chromosome… has only helped strengthen the extraordinary bond between Willow and her siblings, especially her big “Sissy,” Bella.

Willow and Bella, Bella and Willow, The Two Terrors, The Dynamic Duo are true best friends. BFF’s. They do everything together and love being together. Well, most of the time, that is. Bella could probably do without the 6:30 am wake up call from Willow. Willow doesn’t understand that just because she’s awake doesn’t mean Bella needs to be awake. If my husband and I don’t keep and eye on her, Willow usually finds her way to Bella’s room and starts banging on the door, yelling “Sissy!” in an attempt to rouse her playmate. It’s cute, I’m not gonna lie. In fact, I might be guilty of watching from behind a corner for a few seconds before coming to the rescue. Ooops.

When Bella finally does wake, the two sisters waste no time getting down to business. Sometimes they play with dolls and stuffed animals. Sometimes they set up a pretend store and load their cute little purses with fake dollar bills. Other times they play dress up. I’ve seen them as super heroes, doctors and  even animals, but most often they dress up as dancers. These two love music. LOVE. 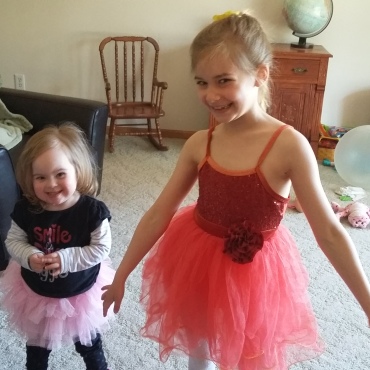 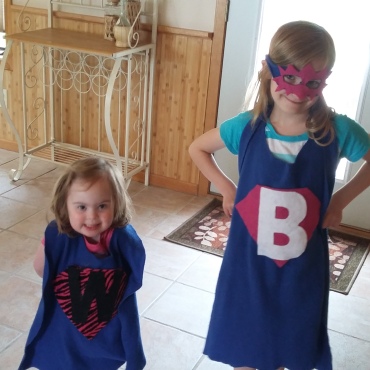 Occasionally, Bella has to break away from the fun to use the rest room. That’s when Willow switches to the role of the annoying little sister. Case in point…

Truth be told, there are other parts of this journey that I’m sure Bella and my son, Laken, find more annoying than a tiny hand under the bathroom door. But, you would never know. The love my children have for each other, the bond they share, is unbelievable. Honestly. Thinking back to those early days after receiving Willow’s diagnosis, I don’t know if I would have believed anyone who would have told me this is what it could be like, what it WOULD be like.

The reality is my girls are, well, just girls. The bond was always there, even with the age gap. Throw in an extra chromosome and that bond just got tighter. Bella’s love for her sister is a protective, proud, adoring force that can actually be felt. In her words “I’m so lucky to have Willow as my sister. She’s the perfect sister for me.”

She right. They’re perfect for each other.

Bella is away at summer camp this week. It’s been pretty quiet around here. Well, except for the occasional “Sissy?”

She’ll be back soon, Willow. I promise…..